imagination and the mind's eye 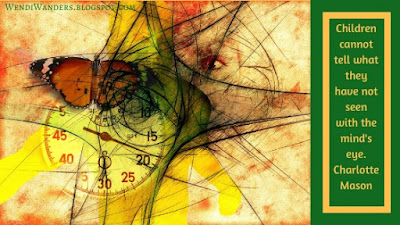 On page 340 of volume 6, Mason says that, “We trust much to pictures, lantern slides, cinematograph displays [movies, you-tube videos could be included here]; but *without labour there is no profit,* and probably the pictures which remain with us are those which we have first conceived through the medium of words; pictures may help us to *correct our notions* (emphasis mine), but the imagination does not work upon a visual presentation.
Again, “*children cannot tell what they have not seen with the mind’s eye.*”

In addition to experience and wisdom to support Mason's points, we now have some advanced scientific evidence backing her up. "Scientists, psychologists and English academics at Liverpool University have found that reading the works of the Bard and other classical writers has a beneficial effect on the mind, catches the reader’s attention and triggers moments of self-reflection. Using scanners, they monitored the brain activity of volunteers as they read works by William Shakespeare, William Wordsworth, T.S Eliot and others. They then “translated” the texts into more “straightforward”, modern language and again monitored the readers’ brains as they read the words. Scans showed that the more “challenging” prose and poetry set off far more electrical activity in the brain than the more pedestrian versions.

Scientists were able to study the brain activity as it responded to each word and record how it “lit up” as the readers encountered unusual words, surprising phrases or difficult sentence structure." Not only that, but the effect lasted beyond the reading of that sentence. It was as though, said the researchers, the unusual phrasings hooked the brain and revved it up to a higher level of thinking, and this continued as the subjects read further.

When those words and phrases were simplified into every day language, the brain no longer engaged with the material in the same way. Think about what that means when we choose a simplified version of the Bible instead of one with richer, deeper, stronger vocabulary and syntax. What if the complexity of richer translations is *not* a hindrance, but rocket boost to the brain, as reading Wordsworth and Shakespeare in their original phrasings? (more here: https://www.telegraph.co.uk/news/science/science-news/9797617/Shakespeare-and-Wordsworth-boost-the-brain-new-research-reveals.html)

Mason also notes the “pictures which abide with us are those which the imagination constructs from written descriptions."

How many times have we been disappointed by a movie depicting of something we've read and loved, because it's unsettling and even irksome to see our strongly imagined images of the book replaced by somebody who probably 'got it wrong?' We created abiding pictures in our imaginations, and we did it from those written descriptions.

This is really a remarkable achievement. Just think about it! The human brain devised a one dimensional, visual, symbolic representation of spoken language. Using this set of visual symbols of an spoken collection of sounds enables us to read a description of an event written two thousand years ago by a total stranger to us, and still create, from those symbols, words and pictures in our heads that match the symbols. Through the work of translators, we can do this even if his spoken collection of sounds was nothing much like our own, and his written symbols likewise is different from our own , and the translators did their work long after the first writer was dead and long before we were born. This is really incredible.

We put our imaginations to work to put a face, an image, a picture on the scenes, things, events, people, even ideas, that we reada about in well written books- and the books which we have to work at a bit are the very books that give us the strongest tools with which to create those images. They fuel our brains.

In an article published in the Parents' Review, E. A. Parish said: "The word imagination means "to face"—to visualize an image, to almost make the thought concrete from within. The power of reasoning and the power of imagining go hand in hand. The power of reason without imagination tends to make us materialists and unable to understand faith.” Imagination must go together with reason and knowledge.

Mason talks about cultivating the imagination in volume 4 and explains “–The more we know, the more ordered and the more rich should Imagination become in us. In order to have a richly-stored picture-gallery of the Imagination we must read much, and, also picture to yourself what you’re reading.”

As you read, knowledge builds on itself, things you’ve seen referenced in one place are referenced again in a slightly different way, and gradually, a web of knowledge is formed. This is the best way to build vocabulary, too, and a good vocabulary is one of the best predictors of academic success. You’ve probably heard of the 30,000 word gap? Kids in families who read come to school with a 30,000 word bank advantage over kids who don’t. Too often those involved in education hear these stats and think, "Aha, we must improve their vocabularies," and then come targeted vocab lists, with long lists of words and abstract definitions for the kids to memorize by rote, and in doing so, they cannot really use those words outside of the original context in which they first memorized the words and matching definitions. That's not it.

Those words represent more than just words with a definition. They represent knowledge, words in context, in many contexts and variation, and each one is a new combination to a new idea, a new perspective, a new picture for the mind. We don't build vocabularies by memorizing lists, we build it through wide and generous reading, and discussions, and exposure in many contexts, and discussions. It's the difference between learning a language in a high school class and learning a language in a family, between being able to pass a test or hold a conversation and communicate ideas in sentences of one's own.

Building pictures in the mind's eye begins at birth, when parents sing to their child, when they to the baby, when they say, "Let's change these clothes," and they do, when they say, "time for a bath," and then put deed to word. It continues when you point to things and identify them, and then it really explodes when you tell your small child stories.

""Every father and mother should have a repertoire of stories––a dozen will do, beautiful stories beautifully told; children cannot stand variations. "You left out the rustle of the lady's gown, mother!" expresses reasonable irritation; the child cannot endure a suggestion that the story he lives in is no more than the "baseless fabric of a vision." Away with books, and "reading to"––for the first five or six years of life. The endless succession of story-books, scenes, shifting like a panorama before the child's vision, is a mental and moral dissipation; he gets nothing to grow upon, or is allowed no leisure to digest what he gets. It is contrary to nature, too. "Tell us about the little boy who saved Haarlem!" (note: this is the story of the little Dutch boy with his finger in the dike). How often do the children who know it ask for that most hero-making of all tales! And here is another advantage of the story told over the story read. Lightly come, lightly go, is the rule for the latter. But if you have to make a study of your story, if you mean to appropriate it as bread of life for your children, why, you select with the caution of the merchantman seeking goodly pearls. Again, in the story read, the parent is no more than the middleman; but the story told is food as directly and deliberately given as milk from the mother's breast. Wise parents, whose children sit with big eyes pondering the oft-told tale, could tell us about this. But it must be borne in mind that the story told is as milk to the child at the breast. By-and-by comes the time when children must read, must learn, and digest for themselves."" (more here)

If Mason called an excess of picture books a 'dissipation,' imagine what she would think of giving small tots access to screens which do all the labor of producing the images and how they move and sound so the child need do nothing but  go glassy eyed and slack jaws, a small spectator, but not a thinking participant.

Build that mind's eye, give the children material to work on.  Sing to them. Tell them poems. Tell them stories. Talk with them. When you add stories, make them the kind that fill the imagination, but leave something untold, something to wonder and think about.
Other things Mason does that help strengthen the ability to picture things in their own minds:

Picture study
Drawing
Nature study
Sending the children to look at a scene and then come back and tell you as much about it as they can.
Narrating.
Reading well written books.
Learning about how people lived in the past and sketching the tools they used in their century books
Keeping a timeline
Free time for thinking and dreaming


We want to help our children build an “imagination furnished with pictures that open out in long perspective, and enrich and ennoble life”


If you found this helpful, you'll probably love my products: https://gumroad.com/wendiwanders
Education for All, a new Charlotte Mason e-zine. In this issue: Handicrafts, toys, imagination, nature study, and more!Loading...