Just going around in circles, day after day... Have you ever watched a chicken roam the yard? It wanders here and there, going in circles, darting off after a moth, now a mosquito, now a grasshopper, scratching the earth, rarely looking up.
She spends her days scratching, clucking, wandering in circles, hither and thither.

"Those seeking the life of the spirit should be cheerful and free, and not neglect recreation.

Married people must act in conformity with their vocation~
but their progress will of necessity be but the pace of a hen."


~~Teresa of Avila, who, while theologically we are not on the same page, here I think she's kind of got a point.

Josephine Moffet Benton, in her book The Pace of a Hen, points out that while the hen does not appear to go anywhere, has not have the satisfaction of migrating twice a year as do many of the songbirds, and appears old fashioned and a little ridiculous at times, yet she brings 'forth creation of daily usefulness.'

I like that phrase. Do I live up to it? Do I bring forth creation of daily usefulness? That might be something to ponder in the morning watches or late at night.

And why not go in circles? asks Mrs. Benton. She points out that God created the year in a circle of seasons, the longest trip we can take is to make a circuit around the world, and each day is itself a circle of hours. "The very course of blood through our veins and arteries is known as the circulatory system.... Why disparage going around in circles? Any other route suggests imbalance, a jumping-off-place, abyss. Perhaps the hen's pace is a wholesome one in rhythm with the universe."

Do you spend your days spinning your wheels, feeling like you're just going around and around without making progress?

DNA is a spiral- it goes around and around, yet it holds the mysteries of life. Spiral staircases also go around and around in a seemingly tightly circumscribed space. Yet at some point you find that you are moving up- or down.

Make sure your circles are bringing you closer to God and the center of His Will, yes, but don't worry about the fact that they are circles.

PIctured above: an 1896 wallpaper design by William Morris because I like it.
Posted by Wendi C. at 6:39 PM 2 comments:

Daily work for the mind

–Do not let the children pass a day without distinct efforts, intellectual, moral, volitional; let them brace themselves to understand; let them compel themselves to do and to bear; and let them do right at the sacrifice of ease and pleasure: and this for many higher reasons, but, in the first and lowest place, that the mere physical organ of mind and will may grow vigorous with work. Charlotte Mason
Posted by Wendi C. at 9:27 PM No comments:

My Christmas Tree and TMI

We were supposed to be flying to Malaysia the day after Christmas to begin a two year period of mission work there. As of Nov. 4, when a bomb dropped on my 37 year marriage and shattered it into pieces, we not going to Malaysia. There is no longer a 'we' in that sense. I am still pulling out the shrapnel.

I am currently living in my American home with my disabled daughter. It's a huge house, four bathrooms, 8 bedrooms plus a small study or office, two stories, a massive great-room upstairs.... It used to be a lot more crowded, but then the godsons moved away and the other six kids moved out, most of them married, and I spent the last year purging stuff I rather liked in preparation for the move to Malaysia (which wasn't my choice of places to go, and which I learned recently was to be the place where I and my daughter would be abandoned while my spouse moved to Taiwan with another woman). So here we are.

We mainly keep to the master bedroom and bathroom because it's cold and it saves on the electric bill to just keep two rooms cozy enough to endure without wearing enough blankets to make up two beds. She has very small capillaries and doesn't endure cold well at all.  And I prefer some deep safe space at this time in my life.

Although for decades Christmas was a huge event to me, as you can imagine, this year I am not feeling it. My Christmas things used to take up nearly a dozen of the very largest storage totes. I purged them down to two or three totes before we went to the Philippines. I haven't decorated for Christmas in three Christmases because I did not have access to my things, and now that I do, it's just too much to do, too heavy a weight, too hard. I thought about getting a tree and decorating it, but that was too much to do by myself. It's hard enough to get up and walk thru each day.

And then I saw a picture somebody posted online and then a friend reminded me that I did not choose this and I was ambushed, but God has always known and He is never surprised, my story will be different, but does continue, and that gave birth to an idea, and this is the result: 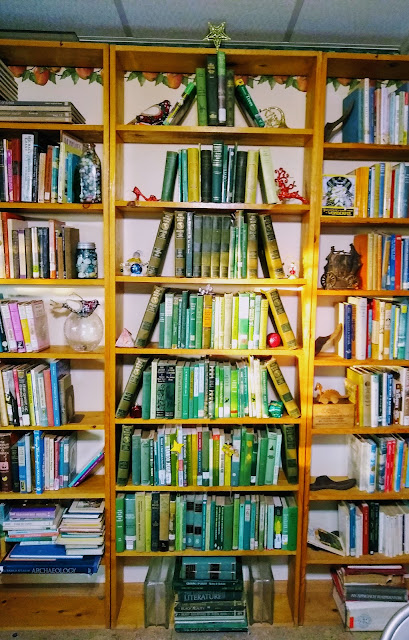 This is my Christmas tree this year.
Its name is talitha cumi.
Posted by Wendi C. at 7:44 AM 5 comments: