You Can't Always Choose Those Affinities

Veteran Homeschoolers know that homeschooling can and does take us anywhere, and we never can be quite sure where the next interest will lead us.
One of the things My favorite Homeschool Mentor, Miss Charlotte Mason, talks about is the importance of putting children in touch with what she calls their ‘affinities.’ Affinity can mean ‘A natural attraction, liking, or feeling of kinship’ and it can also mean a ‘Relationship by marriage.’ This starts to make sense you remember that Miss Mason also says that ‘education is the science of relations.’
You see, the more things we know and find interesting, the more connections we discover between those old things and new things we learn- the more we know, the more we can know, and the more we care about things, the more interested we will be in knowing more. Incidentally, that’s one of the many reasons it is important not to dismiss topics that just don’t interest you based on the question, “When will we ever need to know that!?” You don’t know, and decisions based on ignorance are seldom best.
This is also why we don't reject topics on the basis of our assumptions that they won't interest our kids, because we are not infallible in that assessment.  I cannot count the number of times I've made that mistake, or heard somebody else say, "I really thought my child would hate that/be bored by that, but it turned out to be a favourite!"  We give our children (and, btw, ourselves) a wide and generous education so that they may discover as many of these affinities as possible.

There don't have to be reasons for them- as I eventually learned to say when people would ask me about my love for nearly all things Asian, and especially Korean, to the point that we've left the U.S. to live in parts of Asia twice and plan to do so again: "I don't know why.  Sometimes you just like something because you like it."
There are topics out there just waiting to sound the note that will resonate with the strings of your child's heart because those strings are tuned to the same scale, and something about it sounded a note and the strings of their heart will vibrate and echo back the same note, and there they are, connected, in love, hungry to know more, introduced to perhaps a life long passion for a topic that six weeks ago neither of you ever knew existed.
It's beautiful, a thing of wonder and awe to watch unfold. It's unpredictable. It's fun. It's wild and wacky and you never know where it will take you.
For instance....
From time to time my husband and I have picked a book to read together. Because our clocks are on alternate rhythms we end up taking turns with it- I read him to sleep at night, and he reads me back to sleep in the mornings. One way or another we get through about a book together about every five years this way. Several years ago we were reading Penny Gardener’s Charlotte Mason Study Guide together. I had already been using CM's methods in our homeschool for several years, but he wasn't interested in nor had the time for all six volumes, so we read this one together As it happened, during the time that this book was our husband/wife read aloud, we took a little jaunt over the Cascade mountains of Washington state to visit relatives.  As was our custom, we stopped at a national park along the way to enjoy our picnic lunch and squeeze in a little nature study.
It was truly lovely, one of those delicious homeschooling moments where all the work and reading seems to just coalesce in a sparkling, effortless and jewel-like moment. Our multiple Progeny were besides themselves with joy, finding all sorts of “treasures” and exclaiming over each of them. The Headmaster and I were looking at each new find, and smiling conspiratorially at each other and quoting little bits from Gardner’s book all about what was going on- “introducing them to their first-born affinities…” “intelligence limited by their interests,” ‘…nature study,’ yadda, yadda, yadda.  We were feeling quite smug and odiously full of self satisfaction, when all the children (omitting only our infant son and our daughter with severe disabilities), let out war whoops of excitement over the greatest find of all, ever, anywhere, at any time, they’d never seen anything this wonderful on a nature trek before, they couldn’t believe it, we would be so impressed, it was so amazing, just wait until we show you, they shouted. They were giddy, and practically incoherent. All we clearly understood is that this was incredible and they were gleeful about it and couldn't wait to share.
Chattering with delight and using sticks and a plastic bag they proudly brought their newfound treasure to us to examine, admire, and gloat over with them.
It was a great pile of what we believe to be…. bear scat (that’s poop, to the uninitiated).
We actually have a children’s book on animal tracking that includes the different types of scat produced by different animals, but it didn’t include bear for some reason, so we could only be reasonably sure. Our certainty was largely by process of elimination (what a terrible pun). It didn’t look like anything human. It didn’t resemble anything in the book. It was large. We had some clues about the critter’s diet and they were compatible with what we knew of bear diets. For those interested in these details, we later did find a better illustration, and yes, it was  definitely a large and living example of bear scat.
I was rather excited by this discovery myself.  However, my poor husband sat upon the picnic table with his head in his hands, melodramatically moaning:

“Poop. My daughters are interested in POOP. This is what homeschooling has led us to? Poop? They have an affinity for manure!???! We’re surrounding by all the wonders of nature and my little ladies go for the droppings?!!”

Which was a pretty fair assessment.
We consider it a success story. And for those wondering, yes, our children occasionally included sketches of scat in their Nature Notebooks, and now some of their progeny do, too.

You just never know , yours might do the same. 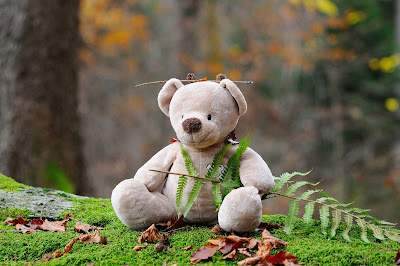 *The book we were using that had no bear illlustrations is still quite nice for beginners. It’s called _Tracks, Scats and Signs_ by Leslie Dendy, published
by Northwood Press in Wisconsin.
Pictures of bear scat
Some North American animals and their tracks
Florida critters and tracks
More animal tracks
Nature tracking website
Mammal scat of North America
Posted by Wendi C. at 6:00 AM