Imagination and Empathy in the Curriculum, part II

Part I is here.

In volume VI of Mason's six volume collection on education, she shares the following story about a child of five.  You may remember it, but let's review.

This is really where it all began for Mason. Although she'd been studying education and teaching in various capacities for years, this was her first real experience with children in the bosom of their families in their own homes.  The nieces and nephews of a good friend of hers were sent home from England to be educated, and Charlotte's friend taught them at home.  Charlotte went to visit the family and she was amazed. Children do behave rather differently in those two places, don't they? So when Mason finally had an opportunity to observe this, it surprised her.  There was more to children than she had expected- in many ways.  She does not seem to have previously realized just how fully developed children were on their own, how much they were already their own persons.

She says she found them astonishing, "persons of generous impulses and sound judgment, of great intellectual aptitude, of imagination and moral insight."   She tells this story as an example of two of those concepts- that’s the account of the 5 y.o. girl who came home from a walk utterly inconsolable.  After some time and a combination of coaxing and letting alone, she gasped out what was so heartbreaking to her, and shared that she was upset because  there was a was “a poor man––no home––nothing to eat––no bed to lie upon,"––and she burst into tears.“

There's a comment here with more pathos than she may have intended. “Such incidents may be common in families, says Mason, but they were new to me.” How many people working with children have no idea how different they are in the bosom of their families, how much there is to them than they reveal in a classroom?  And perhaps a number among us are parents who have this opportunity every day, but we are not ourselves as observant as we should be. However, I digress.  Recall that Mason told this incident specifically as an illustration of how advanced children are in two specific traits- here's the list again- generous impulses, sound judgment, intellectual aptitude, imagination and moral insight.  (One thing she notes where they fell far short of adults was in their "illimitable ignorance." We'll come back to that later.)  Which two traits do you think we see unveiled in this little story?

The traits Mason thought this story illustrated were the children's natural capacity for imagination and moral insight.
Moral insight I understand.  But I had to think a bit to see this as an example of imagination.  Do you see it?  Is this the sort of example you would choose to illustrate the trait of an active imagination?

Here's how I think it demonstrates imagination.  This is a middle class, upper middle class, probably, child of five.  I'm not sure how many of those details the child would have seen first-hand.  Perhaps simply learning he had no home helped her go on to imagine he also had no bed and no food.  Her grief as well shows us that she has not just imagined his condition, but a child who can hardly ever have been without a bed and food herself has managed to put herself in somebody else's shoes and imagine life from their perspective, and that exercise of imagination is what reduced her to tears.

Have you ever complimented your kids for having a great imagination when they were sad for a stranger or performed a kind act for another person?  I usually think of imagination as having to do with self-expression, and while that has its place as well, that is not very often the purpose Mason envisions for it in her philosophy of education.  I've been hunting up and collecting references to imagination in Mason's philosophy, and repeatedly I find Mason and her fellow P.N.E.U. members promoting the development of sympathy through imagination, emphasizing the use of imagination in compassion, in warmth and understanding for others.  Only rarely do I find that they focus, or even mention, its value or use in self-expression.

Imagination lets us see more than the naked eye, and it allows us to see with the heart as well as the reason. Reason without imagination makes materialists of us all, unable to recognize faith.   E.A. Parish also quotes Dr. Greville MacDonald (son of George MacDonald), who says it 'recognises the shining light in all things living,' and imagination illuminates what it sees.'  (Note: this is the philosophy of materialism, where all that is in the universe, is matter, a physical world only, with no such thing as spirit or soul. Taken at extreme, even the mind and ideas are mere emanations of the physical) 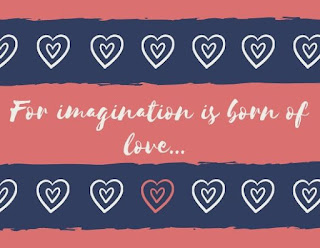 
Imagination is essential for sympathy,* for putting ourselves in somebody else's shoes.  It is necessary to right development of character.  And it is even necessary for habit training.

In an article published in volume 13 of the PR, Mason explains, " To think fairly about the personal rights of others requires a good deal of knowledge as well as judgment. But we can all arrive at some right conclusions by calling in the help of Imagination. That boy is none the less a good fellow who realises his mother's love for the beauty of neatness; who recollects that the maids have enough to do with their regular work; that enough work makes people happy, while too much spoils their lives; and, thinking upon these things, is careful about such little matters as to wipe his feet when he comes in, to confining his messes to his own den, to avoid leaving tracks of soil, tear and damage to show where he has been, because he knows that this sort of recklessness spoils the comfort and increases the labour of other people. "


This, too, is an example of imagination born of love.

In case I haven't made my direction clear, it is my understanding that in Mason’s philosophy, the purpose of imagination isn’t primarily self-expression, but love, a love which creates an active sympathy for others- it’s a flowing outward from a heart and mind filled with thoughts of other people rather than thoughts of self.

Now, there are many ways to help inform & point imagination that direction, and not all of them have to do with books. I've shared a lot of ideas and information about that in this e-zine.  In this series of blog posts I'm going to share what I've learned about the use and purpose of imagination and development of sympathy through the school curriculum, the how, the why, the who, and more.

I hope you'll join me and share your ideas as well.

Choose a way to narrate what you've read- make a list of ideas, write down as much as you can remember as fast as you can in a minute or two.  Find a friend to discuss it with.

Look for examples of imagination and empathy at work in your children, in your stories, in people around you.

*The word empathy was first used in the 1900s, and then it had something to do with art.  It wasn't really commonly used to refer to feelings towards others until the mid 1950s.  In Mason's day, all that we mean by empathy was included in the word sympathy.

Volume VI, Toward a Philosophy of Education, volume VI

"The need of imagination in daily life" by Mrs. Edwin Gray, June, 1914 Parents' Review, copy in my personal files

Imagination article by E. A. Parish, volume 25, no. 5:   https://www.amblesideonline.org/PR/PR25p379Imagination.shtml

PR Vol 13 p. 046-054 Ourselves, Our Souls and Bodies,  The House of Heart, Part II, by Charlotte Mason, being prepared for sharing on our website by wonderful AO volunteers, visit our forum if you'd like to help us out with this project where we have provided free access to all the PR articles we can gather, and we've been making them freely available to the general public for nearly 20 years now.


Education for All E-zine, vol. 2, the imagination issue