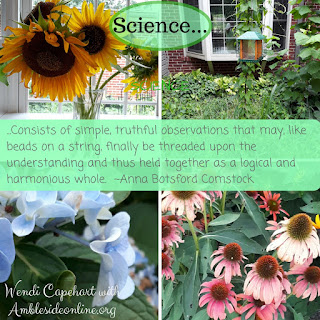 Outdoor play in the wild- not on equipment at a sterile park, but play with mud puddles, ponds, dirt, trees, and the risk of skinned knees, bug bites, and splinters.  Play transitions into noticing- listening- smelling- seeing- feeling- wondering.  "Oh, look at this caterpillar!  I love that colour.  I wonder what it those bits that stick out are for?"  "Wow, this weed looks beautiful, but it stinks. I wonder why it smells?"  "See those tracks in the mud by the creek! I wonder what made them?  Do they remind you of anything? They kind of look like two crescent moons to me.  Let's look these up when we go back home."

All that is just off the top of my head. I am sure if we took more time we could come up with more things, but they would still all have this in common- they are what human babies, toddlers, preschoolers, and small children do and have done for ever and ever.

You'll transition to sketching, and let me stress here that it does not matter that you cannot draw, that you hate to draw.  The goal here is  not to produce lovely drawings (it's nice if you can, bonus! But that's NOT THE POINT!).  No, all you are trying to do is two things:

~Produce enough of a rough draft to serve as a reminder of what you saw to help you look it up later.

You may also enjoy this post on science and CM, what to look for in your science books.

$5.00- Education for All, vol 2- the Imagination (and more) issue!- transcript of the imagination talk from the AO Camp meeting, with additional material I had to cut to save time.      $5.00- Education for All, a new CM journal,   Feed Your Mind!  This issue contains several articles on handicrafts, outdoor play, nature study and science. See sidebar for purchasing options if you are in the Philippines.
$3.00 Five Little Peppers and How They Grew Copywork (grades 2/3, carefully selected with an eye toward finely crafted sentences, lovely bits of writing pleasant to picture in the mind's eye, and practice in copying some of the mechanics of grammar and punctuation typically covered in these years.
$3.00 Aesop's Fables Copywork for Year One!  Carefully selected with an eye toward well written sentences, memorable scenes, and some practice copying sentences that model the basics of capitalization and punctuation.   Suitable for use with children who have already mastered the strokes and letters for basic penmanship.
Picture Study!  Miguel Cabrera's beautiful, diverse families, painted in 18th century Mexico this package includes 9 downloadable prints along with directions for picture study and background information on the artist and his work. $5.00
Common Kitchen:  What's for lunch?  Isn't that a common problem in homeschooling families?  What to fix, what is quick, what is frugal, what is nourishing?  How can I accomplish all those things at once?  We homeschooled 7 children, and I was a homeschooling mom for 29 years on a single income.  I collected these recipes and snack ideas from all over the world.  These are real foods I used to feed my family, my godsons, and sometimes my grandkids.  Includes some cooking tips and suggestions for sides, and for a variety of substitutions.  I think every family will find something they can use here. $5.00