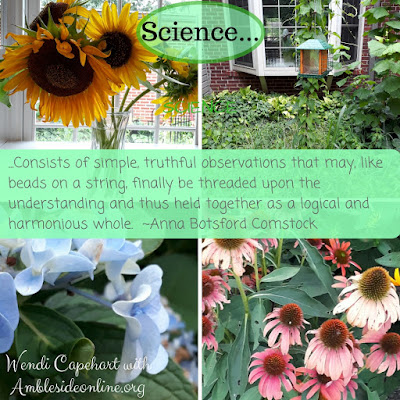 While the academic world focuses on 'STEM' activities, it often actually undermines true STEM activity in the child's mind by using scripted lessons, pencil and paper work, and rote memory crowd out the more meaningful real world observation and first hand experiences.  As John Holt noticed, for young children learning comes as naturally as breathing.  So for the early years, in particular, the best approach to science and most other topics is to give them scope to apply those natural skills.
Among the skills young children already display that will be useful for formal science learning later include observing, noticing, wondering.  In fact, consider this checklist from the book Inspiring science in the early years: exploring good practice  and compare it to the sort of life and education that naturally follow a Charlotte Mason education:


"Practical skills of observation: noticing, and looking closely and in a
sustained way (sustained and focused observations helps children to pay
attention).
Being curious and asking questions.
Reasoning and thinking skills: thinking about what will happen; explaining
what they have seen.
Noticing similarities and differences in order to sort and classify to support
the development of ideas.
Measuring: how high the bean stalk has grown, which car goes the furthest.
Testing and finding out for oneself.
Communication skills: speaking and listening, discussing, describing and
recording observations, using correct vocabulary.
Social skills of cooperation, negotiation, leadership, following instructions."*

An important part of being a parent of young children, whether you are going to use Miss Mason's ideas or not, is your own attitude and what you communicate.  The same book tells us that children are better served when parents and teachers model:

Wanting to find out an answer to a question, being excited about what will be discovered, feeling awe and wonder, persevering, and having a caring attitude toward living things.  Does this describe you?  It's not too late to develop a sense of curiosity, a deep and abiding interest in as many aspects of creation as possible.

Miss Mason noted something similar in volume 1 of her 6 volume series:

"The child who sees his mother with reverent touch lift an early snowdrop to her lips, learns a higher lesson than the 'print-books' can teach. Years hence, when the children are old enough to understand that science itself is in a sense sacred and demands some sacrifices, all the 'common information' they have been gathering until then, and the habits of observation they have acquired, will form a capital groundwork for a scientific education. In the meantime, let them consider the lilies of the field and the fowls of the air."

G. Dowton of the House of Education wrote in 1930: "There is no kind of knowledge to be had in these early years so valuable to children as that which they get for themselves, of the world they live in. Let them at once get into touch with Nature, and a habit is formed which will be a source of delight through life. We are all meant to be naturalists, each in his own degree, and it is inexcusable to live in a world so full of marvels of plant and animal life and to care for none of these things."

And of course, Miss Mason had been saying that already for decades:

"Nature Knowledge the most important for Young Children.––It would be well if we all persons in authority, parents and all who act for parents, could make up our minds that there is no sort of knowledge to be got in these early years so valuable to children as that which they get for themselves of the world they live in. Let them once get touch with Nature, and a habit is formed which will be a source of delight through life. We were all meant to be naturalists, each in his degree, and it is inexcusable to live in a world so full of the marvels of plant and animal life and to care for none of these things."

And again:
"Children should be encouraged to watch, patiently and quietly, until they learn something of the habits and history of bee, ant, wasp, spider, hairy caterpillar, dragon-fly, and whatever of larger growth comes in their way."

Our job is to see to it that such things *do* come their way.  During harsh winters in some North American climes (or perhaps harsh summers in tropical climes), some work can be done indoors with your kitchen scraps.  Below are some suggestions:

One nature study book that I have used often and especially love is called Growing Up Green, by Alice Skelsey and Gloria Huckaby. It's sort of hippy flavored, which I rather enjoy, as it was written in the 70s.

It's available for free reading online at archive.org:

I used this first with my eldest two girls when they were wee mites of one and two years.  Given their age, the fun things we did from this book were as much for Mom and her mind as they were for the tots.  My copy back then came from our local library.

In 1999 I found it again at the local used bookstore and grabbed it for old time's sake. It is a nice book, with lots of fun things to do with your children to share the love of growing things, all year round, including in winter.

The following ideas can make a pleasant interlude from more rigorous scientific researches. They are easy, pleasant to do, free, and can even contribute to a family meal. They do have some scientific value as well, particularly if you always work with your children to help them observe as much as possible on their own, or with only some direction from you.  First-hand observation of a wide variety of real life science (stars, plants, birds, clouds, water, etc)  is the best foundation for science you can give your children.

You can use these activities as the background for a discussion about eating roots, and for a brief lesson on root vegetables and how their roots differ from those of other plants- because the plant stores so much sugar in the roots there is enough energy to sustain further growth when you slice the tops and root them in water.

If you never have grown this kind of kitchen left-overs houseplant, you might begin by having your children guess what will happen. Write down their guesses so they can compare them later. This is also a good time to discuss the different parts of a plant (roots, stems, leaves), and to have a child sketch and label an example.

1. Grow a Potato Vine inside: It's very easy and very pretty. You just stick a potato or a sweet potato (they make a prettier plant) in a jar of water so that just the bottom touches the water.
If the potato is too even in shape to stay up on the rim, then stick three toothpicks up around the side, and they will prop the tater up so it doesn't submerge.


It makes a beautiful vine and you can keep it going for several months. Once it starts to turn a bit yellow, it's time to repot it (I use a large coffee can), and then it will keep for another month or two. Then you need to either dump it or plant it outside and start another one.
For nature study you would have your child sketch the progress of the leaves and roots each week, measuring roots and leaves, that sort of thing.

2.
You can also start a root garden. Slice the tops off of root vegetables such as parsnips, carrots, turnips, rutabagas, or beets. Put them cut-side down in a shallow pan of water (pie pans are perfect). You don't want the top submerged, but you do want enough water to allow the greenery to grow.

The children can could sketch those, measure their rate of grown each week, see if they prefer sun or shade, or if one vegetable does better than another. The tops of the turnips and beets are edible, so you can reuse them in a stir-fry. If you have chickens, you can feed them the greens when you have finished with them.

3. Another fun thing is to take a fatter root vegetable,  like a turnip, hollow it out from the root end, put three toothpicks in the side so that you can hang it upside down, like a small planter or basket. Keep the hole filled with water. The idea is that the turnips sprout leaves, the leaves would grow up, making a leafy looking basket.  It would help to buy organic turnips or beets for this one.

We didn't do these things as huge science projects.  I just liked growing greenery in our kitchen from kitchen leftovers because I liked greenery in the house. I think it's pleasant to the spirit and balm to the soul. I also like free, and I really enjoy reusing things that would otherwise have gone into the rubbish bin. So growing a brand-new window-sill garden of greenery from trash combined several little pleasures of mine, and Moms are people, too, who also need their minds and souls fed.

4. You can also grow lettuce in ice-cream buckets indoors on a very sunny window (sketch them, chart their growth, measure, try different soils)
Or you can grow mung/humon/mongo beans or alfalfa sprouts for eating. Soak overnight, put in a jar with a mesh lid or cheesecloth, rinse and drain three times a day.  My friend grows them in a colander she puts over a bucket because they eat so many at once. Watch their progress, observe a new sprout every day and see what changed. Sketch, measure, really look closely and see how much you can notice.

5. Examine all the fruits and vegetables you eat- notice what part of the plant they come from. Notice their seeds, if any.  Notice the seed pattern inside the fruit.  Find out their native soil and locate those places on a map.  Why do pineapples, mangos, bananas grow very well in Mexico and the Philippines but not so well in Canada?

Life is interesting.  Be interested in the things around you.

New! $5.00- Education for All, a new CM journal, Buy Now!  and Feed Your Mind!  This issue contains several articles on nature study and science.

A gardening book, indoors and outdoors

by Walsh, Anne Batterberry, you may borrow this free at Archive.org

The Charm of Nature Study, a PR article