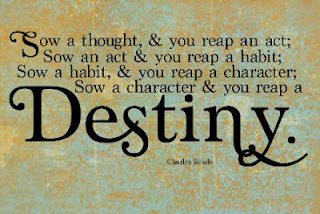 The article below is the first part of an article I transcribed about ten years ago from Volume II of The Parents' Review.  The PR was a periodical edited by Charlotte Mason from 1890 until her death in 1923. Volume II was published in 1891/2, and is, I understand, very difficult to find. If I did not own the only copy in North America at least at the time I transcribed this, I was at least the only admitting it.=)


Parents and Children,
A sequel to "Home Education"
By the Editor (That's Miss Mason)

Sow an act,reap a habit; sow a habit, reap a character; sow a character, reap a destiny- Thackeray.

Our last paper (November number) closed with an imperfect summary of what we may call the educational functions of parents. We found that it rests with the parents of the child to settle for the future man his ways of thinking, behaving, feeling, acting; his disposition, his particular talent; the manner of things upon which his thoughts shall run. Who shall fix limitations to the power of parents? The destiny of the child is ruled by his parents, because they have the virgin soil all to themselves. The first sowing must be at their hands, or at the hands of such as they choose to depute.

What do they sow? Ideas. We cannot too soon recognise what is the sole educational instrument we have to work with, and how this one instrument is to be handled. But how radically wrong is all our thought upon education! We cannot use the fit words because we do not think the right thing. For example, an idea is not an "instrument," but an agent; is not to be "handled," but, shall we say, set in motion? We have perhaps got over the educational misconception of the tabula rosa. No one now looks on the child's white soul as a tablet prepared for the exercise of the educator's supreme art. But the conception which has succeeded this time-honoured heresy rests on the same false bases of the august office and the infallible wisdom of the educator.


Here it is in its cruder form: "Pestalozzi aimed more at harmoniously developing the faculties than at making use of them for the acquirement of knowledge; he sought to prepare the vase rather than to fill it." In the hands of Froebel the figure gains in boldness and beauty: It is no longer a mere vase to be shaped under the potter's fingers; but a flower, say a perfect rose, to be delicately and consciously and methodically moulded, petal by petal, curve and curl; for the perfume and living glory of the flower, why these will come; do you your part and mould the several petals; wait, too, upon sunshine and shower, give space and place for your blossom to expand. And so we go to work with a touch to "Imagination" here, and to "Judgment" there; now to the "Perceptive faculties," now to the "conceptive;" in this, aiming at the moral, and in this, at the intellectual nature of the child; touching into being, petal by petal, the flower of a perfect life under the genial influence of sunny looks and happy moods. This reading of the meaning of education and of the work of the educator is very fascinating, and it calls forth singular zeal and self-devotion on the part of those gardeners whose plants are the children. Perhaps, indeed, this of the Kindergarten is the one vital conception of education that we have."

Although as we shall see when we continue, Miss Mason doesn't really think so. And this is one of the tricksie things about reading Miss Mason's gentle and genteel writings. She is so gentle in her approach that quite often when she is disagreeing with a particular position, less careful readers think she is speaking in approval.

So here is a word picture to help you focus your days.  You are a sower of seed, and your seed is ideas.  Make sure you don't mix in stones and useless chaff with your ideas. Seeds must be spread evenly, and not all clumped together in one square inch or they crowd each other out and none of them can grow well.  Choose well, and give the ideas space to grow. There are things you can do to improve the soil to make it more able to receive and then nurture the seeds that grow.  Don't undo your hard work by going along ripping out the seedlings to see how well they are growing. 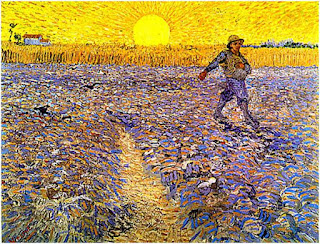 A sower went out to sow his seed: and as he sowed, some fell by the way side; and it was trodden down, and the fowls of the air devoured it. And some fell upon a rock; and as soon as it was sprung up, it withered away, because it lacked moisture.  And some fell among thorns...

Most of the PR articles online are at this site , AmblesideOnline, where, for nearly 20 years, we've been puting all the PR articles we can find online for everyone to read, study, and learn from.

Much of this particular article, I believe, can also be found in volume 2 and possibly 3 of Miss Mason's six volume series.


$3.00 Five Little Peppers and How They Grew Copywork (grades 2/3, carefully selected with an eye toward finely crafted sentences, lovely bits of writing pleasant to picture in the mind's eye, and practice in copying some of the mechanics of grammar and punctuation typically covered in these years.

$3.00 Aesop's Fables Copywork for Year One!  Carefully selected with an eye toward well written sentences, memorable scenes, and some practice copying sentences that model the basics of capitalization and punctuation.   Suitable for use with children who have already mastered the strokes and letters for basic penmanship.