Step One: Steel yourself, harden your heart, and remove a page from a book. This is a page from a school dictionary from the forties- the pages are falling out, there are serious ink blotches on some pages, blotting out the text, the corners are slitting, it's been duct taped together, and some child has already cut out chunks of text or illustrations previously. It hurt anyway, but you gradually become desensitized. 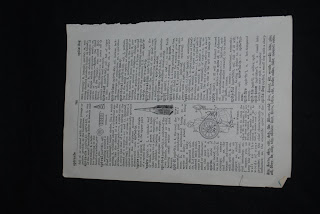 Make strips of paper- how many and how depends on the look you want and the tools you have.
I fold the page in half, in half again, and in half again, rub the creases with the edge of my stapler or whatever I have, and then I usually just gently tear them down the creases to make eight strips. For this picture, I cut the strips instead. I think it is more efficient, but I like the slightly softer edge you get from tearing.

Stack four strips together, make sure they are even with each other (within reason- don't bother trimming, just tap the edges on your work surface so that they aren't wildly out of sinc with each other), fold in half, and staple at the folded edge.


This is the part that is trickier to explain- you take your little book (a long, skinny book) of four strips, folded in half and stapled. You now, of course, have eight strips of paper stacked one atop the other. You will work with just four at a time. 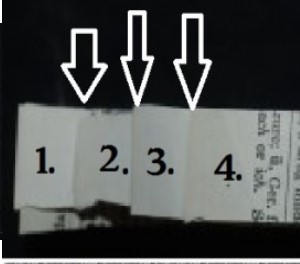 Turn the stack so the flat side is facing you. Count four strips. Take the third strip and attach the end of it to the fourth strip, only slide it down slightly, so it is not even- you will have a tiny hump. Either just hold it that way while you work with the other strips, or use tape, glue, or stapler to attach the third strip to the fourth strip. Repeat with the second strip- only move it slightly below where you attached the third strip, and the same with the fourth strip. You should be able to clearly see each join separately, one below the other.
Both of these pictures are taken from the side after the taping has been done.  Click to enlarge if you are not sure what I mean.
You turn the strip over and repeat the process with the four strips on the opposite side.  When you are done, if you now turn it so the cut edges are facing you, and separate the two sides slightly, it will look something like this: 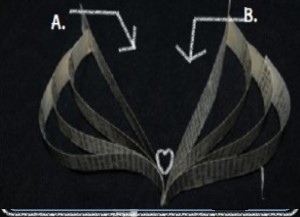 I like this.  If you just attach the two flat strips in the middle along the flat surface, you get a kind of Christmas ornament shape- something to keep in mind for December.
But to make a heart- lets call the left side A and the right side B. You will curve both A and B inside to meet in the middle, at the base where the center strips were divided.  Maybe this diagram will help:

I also insert a cardboard strip into the center for ease of hanging.  I take a narrow strip torn from an index card- for this I tore the index card into four strips, the long way, then folded a strip in half to hide the ruled lines (you can get blank cards, but I was using what I had on hand), insert it between the two halves of the heart, then staple or tape: 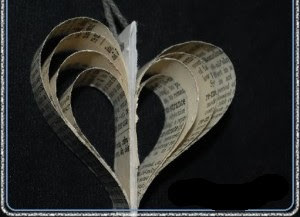 Education For All, a new Charlotte Mason e-zine/journal, with original articles and reprints of Parents' Review articles you haven't seen before!
Posted by Wendi C. at 8:54 PM